Tri City Van and Storage steps up to boost the challenge

LISTEN UP – A THROW DOWN IS COMING! It’s the “Wizard of Weather” vs. the “Slama Jama of Sports!” WHAS11 Meterologist Ben Pine and Sports Director Matt Hobbs are facing off in the Louisville Triple Crown of Running SM. Who has the styles to pull off the miracle miles? You’ll have a chance to weigh in! Thanks to our good friends at Tri City Van and Storage, you’ll help the WHAS Crusade for Children. Stay tuned, it’ll be EPIC!

When you go on the WHAS Crusade for Children Facebook page and “LIKE” Ben or Matt, Tri City Van and Storage will donate $1 to the Crusade for every “LIKE”. So, you have fun by choosing your “LIKE” and you’ll be helping special needs children at the same time.

Here’s the video that started it all!

There’s more to come in this “Wizard of Weather” vs. the “Slama Jama of Sports!” Stay tuned.

More in this press release:
For Immediate Release: October 28, 2010

(Louisville, KY) Registration is now open for the 2011 Louisville Triple Crown of RunningSM (LTCOR) presented by Novo Nordisk! Runners and walkers are viewing a fresh online look this week and discovering new event enhancements when they visit the site. The website, www.louisvilletriplecrown.com, is now open for experienced and novices alike to register for all three or any of the individual events in the popular road race series.

Visitors to the website will also see a new Louisville Triple Crown of RunningSM logo that depicts the running spirit of the race series for 2011. The new logo was inspired by the one-of-a-kind ceramic trophy created by Ngoc Phan of Louisville Stoneware.

The Louisville Triple Crown of Running team welcomes Novo Nordisk as presenting sponsor for the 7th year running. Novo Nordisk is a world leader in diabetes care, driven by a “Triple Bottom Line” with a commitment to economic success, environmental soundness and social responsibility to employees and customers.

“The commitment and support of Novo Nordisk has allowed the Louisville Triple Crown of Running to donate more than $700,000 to the WHAS Crusade for Children in the last seven years,” said Fred Teale, Director of the Rodes City Run 10K.

Sun Tan City is taking over the reins of the 2011 Team Challenge. “Sun Tan City is excited to participate in the Louisville Triple Crown of Running as the sponsor of the Team Challenge event this year,” said Sun Tan City’s Director of Marketing, Angela Rieger. “We are proud to support a long standing tradition in the community as it benefits such a worthy cause, the WHAS Crusade for Children. Plus we look forward to our own Sun Tan City crew competing to win the crown!”

In addition, LEO is now the new Triple Crown’s print media sponsor for the coming race season. “LEO is very proud to be a part of the 2011 LTCOR. This is certainly one of the best racing series in the country and, more importantly, supports a great cause in the Crusade for Children,” said James Hewett, Senior Account Executive for LEO. “We look forward to three successful events with a great turnout from our community and racing fans.”

Race officials and runners alike have come to rely on the disposable ChronoTrack B-Tag to time their races with convenience and ease. Because the B-Tag is mounted on the back of the runner’s bib, it is virtually invisible to the participant and requires no special pre- or post-race handling and does not have to be returned. You get a new bib and ChronoTrack tag with each race. The disposable B-Tag insures high accuracy, fast results and simplicity of use.

About the Louisville Triple Crown of RunningSM

The Louisville Triple Crown of RunningSM has a long-established partnership of generosity with the Crusade for Children having raised more than $700,000 since 1984, including $133,445 in 2010. This year the races had more than 27,000 runners participating in all three events. This resulted in a record attendance for all three races, as well as a record donation to the Crusade. With the exception of the fire departments, this donation placed the three-race series 5th in the top 10 gift-givers for 2010. Also, this total does not reflect the thousands of dollars raised by the Team Crusaders (for CFC), the YMCA, the Metro United Way and other organizations and individuals who raised money for their causes through participation in these events.

The WHAS Crusade for Children, Inc., established in 1954 by WHAS-TV, raises money for agencies, schools and hospitals to better the lives of special needs children. In its first 57 years, the Crusade has raised more than $138 million.

Thanks to generous contributions of goods and services, the Crusade is able to return 100 percent of all donations to organizations that serve special needs children in all 120 Kentucky counties and more than 50 southern Indiana counties. For more information, contact John Blim (502) 582-7521, or visit www.whascrusade.org.

For additional information on the Triple Crown series, please go to www.louisvilletriplecrown.com or contact the following: 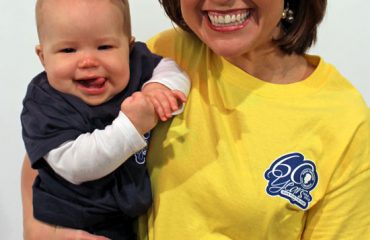 Events countdown to Crusade in 3 weeks

Flying poker fun for the Crusade