This is a special day for four fire departments and one very fine business. They’ll be rewarded for their fundraising efforts for the WHAS Crusade for Children. Crusade President & CEO Dawn Lee along with Crusade Board President Father Joe Graffis made the presentations during a special breakfast at the WHAS11 studios in downtown Louisville on Wednesday morning.

The Walton Memorial Trophy is named in memory of “Mr. Crusade” Jim Walton who was host and emcee of the WHAS Crusade for Children from the very first Crusade in 1954 until 1979.

The trophy is awarded each year to the fire departments with the largest percentage increase in collections from last year to this year, within their category.

The first Walton Award went to the Anneta Volunteer Fire Department which took top honors in departments collecting between $1,000 and $9,999. They had an astounding increase of 159%.

In the $100,000 and above category, the Fern Creek Fire Department is rightly proud to have recorded an increase of 13%.

In honor of pioneering broadcaster Phyllis Knight, the Crusade has created the Phyllis Knight award which goes a business or organization with the largest increase. This year, McAlister’s Deli, the long time crusade supporter increased their total by 13%.

View photos of the honor breakfast 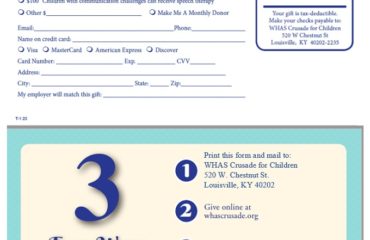 Vote for the Crusade!