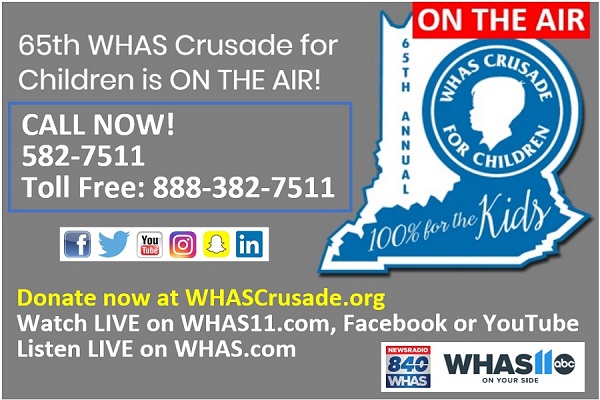 The 65th Annual WHAS Crusade for Children will kick off with a Variety Show headlined by The Misty Mountain String Band. They will be joined by many other great performers including this year’s AMERICAN IDOL contestants Cody Martin and Emmy Bodner, plus 1200 and The Free Soul Effect. Many other Crusade favorites will be performing like Patrick Henry Hughes, Melissa Combs, Todd Hildreth and the Crusade Quintet, magician David Garrard, the Diane Moore Dancers, the Miracle Dancers and more!

Show time is 7:00PM (EDT) at the The Kentucky Center for the Performing Arts Bomhard Theater in Louisville, KY.

The WHAS Crusade for Children telethon begins at 1:00pm on Saturday, June 2 with fire departments, civic groups, organizations and companies reporting donations. The Crusade telethon concludes at 7:00pm on Sunday, June 3. As always, it’ll air in its entirety on WHAS11 TV, 840WHAS radio and WHAS11.com.

The WHAS Crusade for Children is America’s most successful local telethon!

Thrilled and excited to be a part of the 65th Crusade, the Misty Mountain String Band will kick it all off with a free concert at the Kentucky Center’s Bomhard Theater at 7:00pm (EDT) on Saturday, June 2.

Drawing influence from old-time music, Americana, bluegrass, and songs of labor and protest, Misty Mountain
String Band doesn’t stray far from their upbringings in Kentucky and Virginia. Formed as a pickup group for an old-time camp revival, MMSB has evolved into a professional band that’s as at home playing with the Louisville Philharmonia Orchestra as at bluegrass festivals with Americana favorites. The group connects with fans of folk music around the world, sharing unique string band music written for today but informed by tradition.

Kentucky Children’s Hospital gets help from the Crusade